With all versions of SFIV out, which is the most secure for tournaments?

While the headline is basically a rhetorical question since we all know the answer, the question is being raised with Capcom’s console division now that the PC and even Xbox 360 versions of the game have been hacked by users to change move sets and more. As Kevin Williams of The Stinger Report tells us concerning SFIV tournaments:

“The concern now is that prize tournament events will never be 100% secure unless carried out in a special location allowing the onsite monitoring of the players to ensure no cheating; this moving the amusement SFIV more and more as the only true tournament infrastructure for the game.” 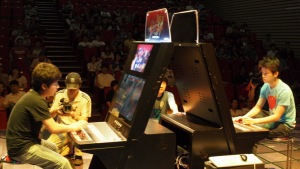 the version being used to play. Speaking of SFIV tournaments, we also have some news on a recent SFIV tournament that was held in South Korea, all inside of an arena that they are becoming famous for. The arcade version is the de facto standard for their tournaments and it looks like this particular tournament was pretty big.

[Discuss on the Forums]