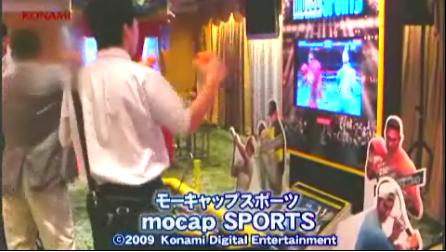 So far we have not seen much on Mocap Sports other than a few static screenshots or 3D models but now thanks to KonamiTV, they have added a brief video onto that site which shows a quick rundown of the titles which were recently shown at Konami’s Private AM Show Asia. You get to briefly watch a clip of two people in a boxing match on Mocap Sports and they also show some footage from the new BishiBashi (thanks for clearing that up editor and nestlekwik) 18 and Jubeat(known outside of Asia as uBeat) Ripples. It’s still hard to tell how accurate the motion sensors are on MS without seeing it in person but from this clip it looks like you can just waggle the thing and it will take it from there.

I would post the video directly to the post here if I could but since we don’t have that ability on our account here anymore, here is the link:
http://www.konami.co.jp/ja/tv/news/1244/br.asx