When Sega first took the veil off of their unique card-based arcade title Sega Card Gen MLB, it was shown in the US at AMOA09, with a tentative release date for Spring 2010. It was 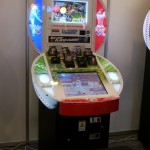 later seen on location test in Illinois, where it then disappeared for a short time until it popped up in Japan. Now after a few location tests there, Sega has announced that the game will be released there in October with a limited production run. You can see that announcement on the Sega Card Gen 2010 official website.

So why did this game which was originally developed for North America get canned only to find some success in Japan? We don’t know all of the details but part of it certainly has to do with a poor location test. For whatever reason, be it the touch screen, the card interface or the game itself, players just didn’t take to it in the US.  Such games have better success in Japan however, which is why it’s getting a release there, even though it will be limited. It’s too bad really, since this was something outside of the mainstream for arcade releases.  Better luck next time I suppose.