Hello there, and welcome to another exciting round of quick curated arcade news known as Newsbytes.

BTW – I did switch hosts and have noticed that the site is running smoothly like it used to. Let me know if you come across any problems though…

While I haven’t heard of any huge new titles revealed at EAG 2020, there is still a little to talk about, such as Sega’s showcase of games in this video. It starts out with a quick look at Mission: Impossible Arcade, where you can kind of get an idea of how the controllers work. It does take a little getting used to, as the center of gravity on the guns is where the swivel base is between them, once you get the hang of it, it’s fun.

It’s also worth noting that yesterday, Sega announced MArio & Sonic At The Olympic Games Tokyo 2020 Arcade Edition as being available in Japan; I imagine that should also be the case with US & EU, since I’d seen a list of game availabilitry saying January for this title (that same list mentioned March for MIA):

Some very sad news popped up this week that the Konbo Arcade Cafe in Edinburgh, UK is closing their doors permanently. This arcade opened back in 2017, combining Japanese arcade gaming with food and Japanese collectibles. While this post on Facebook provides the most detail about the closure, they do not state why it has to close. Unfortunately, these things do happen – whether it’s poor sales, or a bad landlord or some other strenuous factor. If you are anywhere close, then your last chance to check them out is this Sunday, January 26th. Find them online, here.

Speaking of closures, a “VR Arcade” called VR Junkies that is just one shop down from me is closing this week. In their case, it’s been the FEC coming into the mall that has some VR like Hologate and Virtual Rabbids causing sales to collapse. I’ve been fortunate in that the decline in my sales hasn’t been as drastic, but this kind of thing can turn south on you any time. Best I can say is keep your local arcades open and alive by visiting them more than a couple of times a year.

Since we’re on the subject of locations (not sure when the next locations post will be as news on that front has been slow), let’s have some happy news before moving on: Star Worlds Arcade in Dekalb, IL is celebrating 35 years in business today. Congrats!

It seems that the 2020s are marking a return to form for every genre in arcades, including the ones that are a bit more taboo. Since the 1980s, there have been occasional efforts (mainly from Japan) to create soft and hardcore adult video games for arcades. Obviously with the “Family Entertainment” market driving most sales for many years, this genre can’t go into those venues, but there are a number of adult-oriented businesses that exist out there, which may already use arcade entertainment in them. If they’ve wanted something that fits their theme though, they’ve had to rely on older content.

Thus enters a newcomer from the Netherlands called Hawt Pink Club (as a note, their website does not have any adult content on it at the moment, but I imagine they will at some point, so web viewer discretion advised and all that). They appeared at the AVN Adult Entertainment Expo 2020 in Las Vegas this week, showing off their first title in a Vewlix cabinet called Strip Fighter V: Abnormal Edition. From the little I’ve been able to gather, they intend on bringing more “Japanese erotic games” in an arcade format, available worldwide, around the end of April/beginning of May.  No word on pricing yet, but in a larger version of the photo below where you can see the flyer that the model is holding, it seems to imply that it is a kit. Mentioned at the bottom is how “simple to upgrade to new games – no technical knowledge required” and shows a different style of cabinet. The tipster who sent it my way also mentioned that they had a lot of interest at the show, so it sounds like they started off in the right place for that particular market segment. Click for a larger view:

While you can grab an Alan-1 Star Wars repro yoke controller for an original Atari Star Wars machine, some may have homemade solutions that they would prefer to get a yoke controller for. Enter in GRS, a company that has fabricated USB trackball and spinners for arcade use. They are now running a Kickstarter to make the Atari Star Wars yoke, which can work for your Star Wars themed MAME cab. As of this writing, they are half way to their $30,000 goal:

On the subject of repro components, H/T to Mr. Halfspeed on Twitter for pointing me to this custom IC found on certain Irem PCBs. If you have a game with a fault tied to this component, then you’ll want to jump on this.

The creator of Pac-Man is one year older today, so happy birthday to him!  Direct link in case the embed below doesn’t work.

Happy birthday to Professor Toru Iwatani, designer of classic Namco arcade titles like Gee Bee, Bomb Bee, Cutie Q, and "Puck-Man" which would renamed in the US as…eh, you know the rest of THAT story pic.twitter.com/SdmwA8vtux

Think Before You Buy

I can’t say I ever thought that we’d arrive at a day where arcade machines could be “impulse buys,” but here we are: 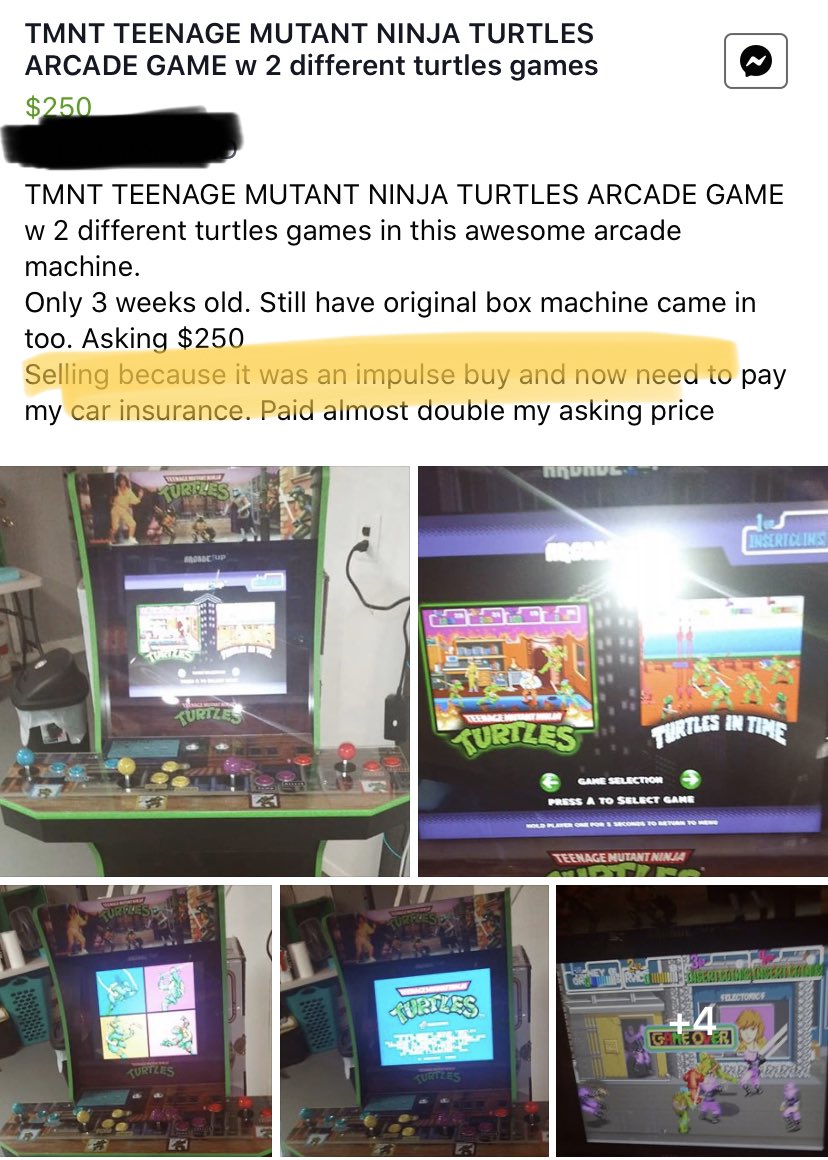 And to end the post off, here’s a CRT chassis board I pulled out of my AfterBurner today for doing a cap kit. Let’s just say, this one has seen much better days. That said, it still works – we’ll see how the image fares after I finish the kit.