Welcome to Location Watch, a curated look at brand new arcade locations that have recently opened their doors, all over the world. I’m a little bit behind on this news thanks to IAAPA, which also means I’ll likely have to divide it into two parts. Thanks to various readers for sending me links, in particularly Michael L. who has compiled a lot of places you’ll read about here. Also H/T to Replay Magazine and InterGame Online who are also always on top of these openings

Find the last Location Watch here; If you do find yourself near any of these venues, do more than just laud them with praise about how cool they are, be sure to go and visit them and buy some cards or tokens.

If this city sounds familiar to some readers, it’s because its the same one where I opened my second location at the end of 2020 – and I am closing up once this month is over. I know the owner, Nate Smith, and by all accounts, operating a bar/arcade is far more lucrative than a straight mall arcade (what he told me he made on games alone in a week is more than I make in a month at my best location :timetorethinkbizmodelface: ). He’s using an Amusement Connect card system and features a large assortment of pinball machines (Guardians of the Galaxy, Hot Wheels, Jurassic Park (Stern) Legends of Valhalla, Playboy, Star Wars (Stern), The Beatles, Toy Story 4 and plenty more) and a few video games, including some that I sold to him like Dragon Saber 😛 I will be selling a few others so in a way, the spirit of my closed arcade will still remain in the city to some degree. Find them on Facebook, here.

I’ve never seen this many people at my location but I don’t serve food/adult drinks. Very pro pinball setup too

This retro game arcade/bar just opened up in Blue Springs, counting as the 5th location for the operator (who operates other locations under different names, from what I can tell). The location boasts plenty of classic video and pinball games, such as: Bosconian; Burgertime; Mario Bros.; Ms. Pac-Man & Pac-Man; Robotron 2084; Street Fighter II; TMNT ’89 & Turtles In Time; X-Men; Xenophobe and plenty more. Visit their website, here.

This bar/arcade is more bar than arcade but they still have a space that they packed with some games including a couple of Skee-Ball machines, a couple of pins and classics like Ivan Stewart’s Super Off-Road, Street Fighter II, an older Golden Tee and others. Here’s a pic from their Facebook page:

The “micro theme park” which is headed up by one of Nolan Bushnell’s sons (and some other partners, I believe), is branching out of LA and can now be found in Dallas. While they will offer some standard arcade games and pinball machines, this company has set themselves apart by creating their own unique arcade games that you can’t find anywhere else. They also give indie games like Killer Queen and Armed & Gelatinous a shake, which is cool.

Subpar has been mentioned on the blog a couple of times before, the location in San Francisco garnering the attention until now. A Subpar did exist in Alameda, in fact it was their original location, but it had closed down 4 years ago. This location is a block away from the original site. The new arcade features an array of newer video and redemption titles, including: Connect4Hoops, Cruis’n Blast, Halo: Fireteam Raven, Minecraft Dungeons Arcade, Step ManiaX, Super Bikes 3, and more. Find them here.  Pic via the operator, TJ Beyer:

Since I can never find much on game lists for FECs (Family Entertainment Centers) and they often place a lot of focus on non-arcade attractions, I’m going to be putting links to those here from now on instead of struggling to write a paragraph about them.

Great Profits But Slowing Sales Makes For Mixed Dave & Busters Q3 Earnings Report – To any operators out there – how are you profits & sales?

A New Pinstack Has Opened In San Antonio, TX

Supercharged Entertainment Opens In Edison, NJ – Over 140 games for their arcade side, spanning two floors

Social Latitude Opens In Greenville, SC – Looks like the arcade games are either Arcade 1ups or MAME cabs though

Massive Entertainment Facility Armory STL Opens In St. Louis – I can’t tell if they have an arcade though…doesn’t look like it

Same thing with the now opened The Park in Richmond, VA. They have mini-golf and duckpin bowling though

Location #3 opened late last month for this growing arcade/bar in the UK and thankfully they are sporting original machines. Their games list currently shows 29 machines, which includes: Asteroids, Centipede, Crystal Castles, Dance Stage Euromix, Guitar Hero Arcade, House of the Dead 2, Lucky & Wild, Moonwalker, Sega Rally Twin, The Simpsons, and more (including a couple of pins). Visit the page for this location, here. 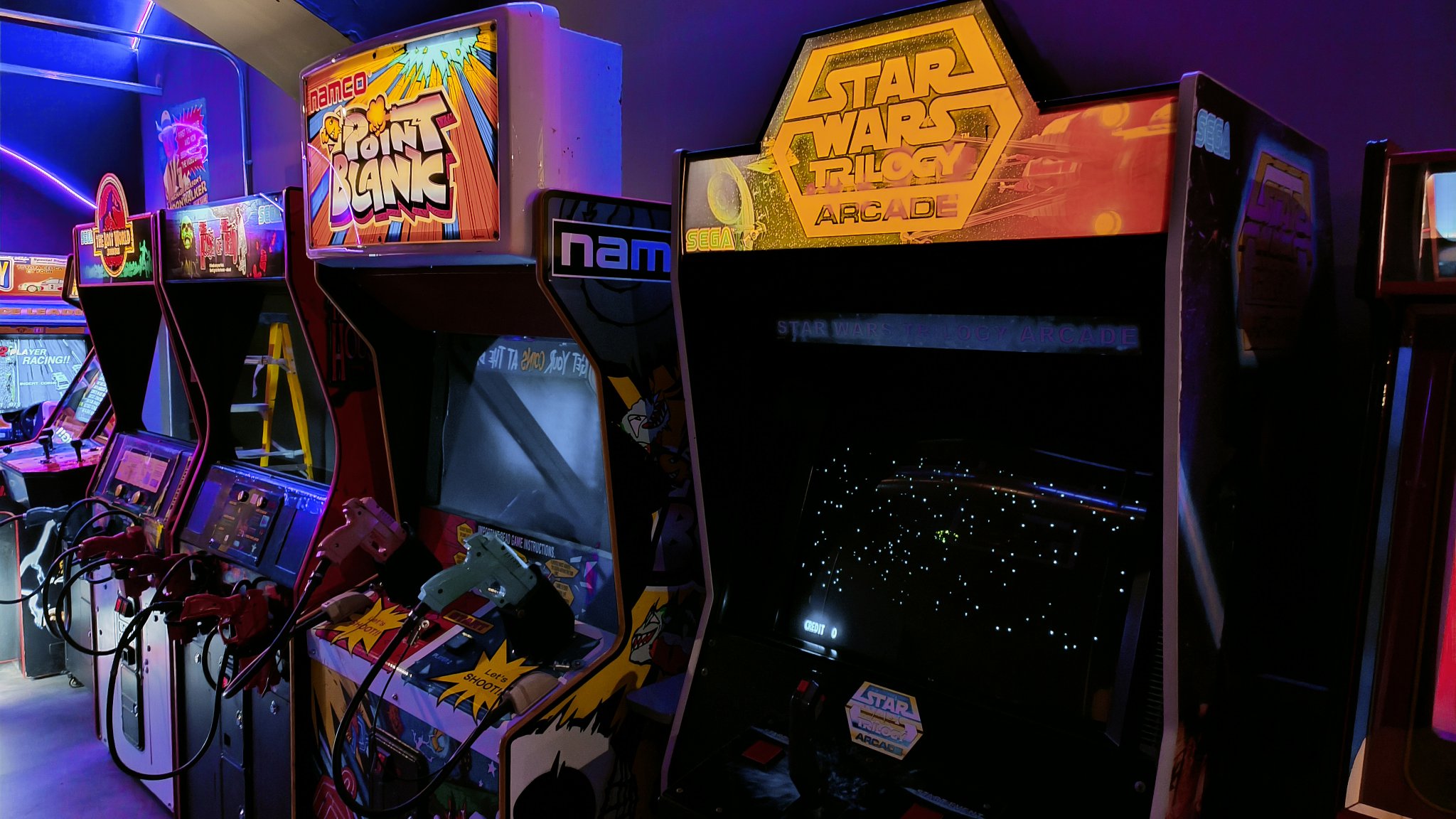 The first Gamestate location in Poland is also billing itself as “the largest arcade in the country,” boasting 1000 m2 of games. From the pic on LinkedIn, I can see King Kong VR and an Atari Pong Knock Out but the rest is redemption, most is hard to distinguish. A page for the location can be found here.

Here’s something you don’t see too often – a venue where the arcade offering is only one game. Developed by themselves, F1 Arcade offers licensed Formula 1 Grand Prix racing on their own systems, along with food & drink options when patrons are not playing or just watching. This guy got to check it out, so you can see how the grand opening went. Visit their website, here; They also have a location set to open in Birmingham next year.

A new FEC that is mainly focused on escape rooms but has a free play arcade just opened in Gravesend with a selection of retro arcade games (although I can’t find any photos of them to see if they are originals, multicades or A1ups). They do have the Mini Golf.io piece I saw at Amusement Expo; They also have made their own AR air hockey table. Visit their website here.

I think that this is a temporary/pop-up arcade and not a permanent one, but they have setup in Hyde Park with a selection of mostly redemption titles:

Gravity Entertainment Opens In Castleford – I checked and checked and it seems like this is an FEC without any arcade games. LMK if I’m wrong there.

I’ve always heard that pinball is big in Australia but this venue is taking it to the next level by opening a complete “American-style” bar/arcade. That includes serving American-style food, among the American-made pins. The main focus is on offering pinball tables like CSI, Dr. Who, No Good Goofers, Spider-man, Star Trek (Stern), Total Nuclear Annihilation, TRON: Lsgacy, and others, and they have some video games like Maximum Tune 3, Mortal Kombat, NBA Jam and TMNT’89. Check them out here.

I’ve reported on this company before, although I’m too lazy to go and count through the list of sites to figure out how many this makes for the chain at the moment (looks like around two dozen, from a glance and guess). One of these locations just opened up in Jodhpur, which is in Northwest India; The other is in Amravati which looks to be smack dab in the middle of the country; and the third is in the Northern city of Ghaziabad. Photos for the first two are rather lacking but the just opened Ghaziabad location has a nice promo video on LinkedIn. Even with that, it’s a little difficult to nail down exactly what the arcade offers but it’s modern and they do have some Western games there, mixed in with some Eastern ones (not sure if they might all be from Indian companies or some Chinese. Hard to tell). Their main website is here.

TimeZone just keeps growing like crazy, I think I’ve mentioned them in every Location Watch this year. This one has opened at the City Centre Mall in Patna (Northeastern India, doesn’t look super far from Nepal). As you’d expect, they offer a huge arcade space loaded with modern games, although I saw one I’ve never heard of called Demolition King, a videmption game where you appear to swing a ball at a screen like it was a wrecking ball. Maybe it’s something new on test or just something that never found its way over to the West.

This new FEC opened up in Kuwait, a country I don’t recall mentioning in Location Watch before. They have bowling and mini-golf but the attractions are accompanies by a modern arcade that includes titles like Mission: Impossible Arcade SDX and Super Bikes 3 (I can only find a single pic of the arcade area and it does look a bit sparse but the aesthetic of the setting looks cool). Their bowling also uses Touch Magix’s SPARX mixed reality system. They have an Instagram account here.

Unbeetable Coming Soon(?) To Schenectady, NY – ? because their last post was in September…could be any number of issues causing a grand opening delay but hopefully they get it sorted out

Peter Piper Pizza Coming To Kansas City Next February – How are the arcades at PPPs? I have never seen a photo of their modern game rooms

80k Sq. Ft. FEC The Palms Theatres & IMAX Coming To Tiffin, OH – Doesn’t say when though since they haven’t broken ground yet

That’s all for this edition but there might be enough to do one last Location Watch before the year is out. Thanks for reading!