AOU round-up for today, with videos!

Here’s a rundown of the AOU news and info for today, complete with videos.

Metal Gear Arcade in action.The videos below by Gigazine show how the glasses work.

The new Melty Blood. I hadn’t seen much on this series before, visually it looks like Arcana Heart (although the it’s probably the other way around if Melty Blood came along first)

Gigazine also has a bunch of write-ups discussing the show, which you can check out here.

Here is a link to the Japanese flyer for Terminator Salvation, via AM-Net. 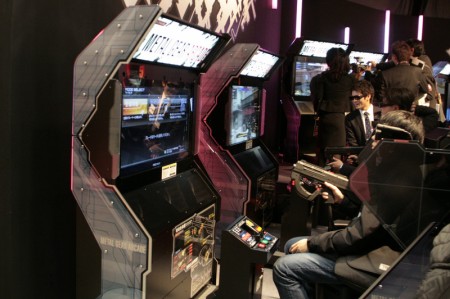 Here’s Famitsu’s look at the show, they have pics of Jubeat Knit and more Konami stuff. I wonder if media outside Japan will at least note the game which will be available outside of Japan, like Terminator, Tank! Tank! Tank! and Dead Storm Pirates but my hopes aren’t very high on that.