While we sometimes have a place to chastise game magazines for ignoring arcades, there is one magazine that has always been open to covering the arcade scene – Hardcore Gamer. They were open to the idea even before I began writing arcade articles for them and it certainly has been a privilege to be able to get the word out about games that aren’t Street Fighter IV in a print magazine. While it is unfortunate that HGM is only printed four times a year, at the very least it’s always an interesting magazine when it is published. 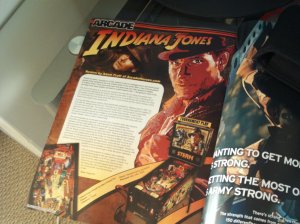 This latest issue marks the second time they have printed a review about a modern pinball game – the first was when I wrote an article about Spiderman pinball. Of course don’t expect to find pinball reviews in other so-called “gaming” magazines – they stopped giving pinball needed attention years ago for probably the same reasons they began ignoring arcades. Indiana Jones pinball can simply not be missed – I believe that it is one of the most popular pins Stern has released in years. At AMOA they told me that the game was breaking earnings records everywhere – at my own arcade it has been one of my top earning games several times.

You can check out the article here as it’s downloadable (Issue #33) or if you can find a hard copy, it’s on page 66, right before the back cover.

Next For Stern Pinball: 007 James Bond