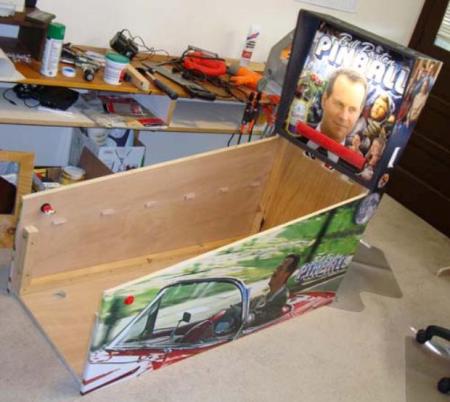 If you want to show off some geeky engineering skills there are many projects out there that you could undertake but few would show off your technical prowess as a pinball machine would (in my humble opinion). Ben Heck is already famous for his many hardware modification projects and he is currently working on a pinball machine to call his own – one that pays homage to actor Bill Paxton. While no playfield image exists yet of the homebrewed machine, he has a cabinet shell with artwork as you can see. Once it’s all said and done, he plans on having a mode for several shows/movies that the actor has had a big role in, from Twister to Titanic, Aliens, True Lies and more. Obviously because it will feature elements and quotes from all of these movies it is not a machine that could be resold legally but it will certainly make for a great conversation piece at Ben’s home, wher eI am sure there are already plenty of good pieces to talk about.

[Via CrunchGear.com] [Discuss on the Forum]