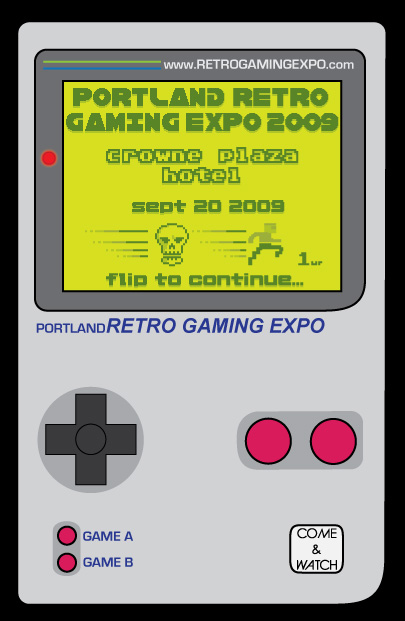 [Thanks to Aaron Auzins for the info]

UPDATED – Had to fix an error regarding where the event is taking place.

If you live in or near the Portland area then heads up, a retro gaming expo which will include some excellent retro arcade gaming will be getting some love on September 19th-20th. Pre- and post-party events will be taking place at Ground Kontrol Arcade in Portland with the main event taking place at the Crowne Plaza Hotel, there will be a lot of arcade love to go around, from classic games set on free play to a raffle prize of a full-size Konami Multicade machine. The admission is quite inexpensive and if you are looking for more details, check out the press release after the break.

The 2009 Portland (Oregon) Retro Gaming Expo is looking forward to its
fourth year and is set to kick off Sunday, Sept. 20. Thankfully, its
organizers haven’t forgotten about arcade enthusiasts and have
scheduled a few events to cater to the coin-op fans.

The festivities actually kick off Saturday, Sept. 19, at the notable
classic arcade Ground Kontrol located in the area, starting at 7 p.m.
and breaking through the night until 2:30 a.m. The arcade will even
host a finale party after the event closes up at 8 p.m. on Sunday.
However, there will be a few nods to the arcade culture at the actual
event as well.
In fact, this year’s grand raffle will see a lucky winner taking home
their very own arcade cabinet. This year’s grand prize is Konami
Multicade machine, packed with 12 classic games such as Frogger and
Contra. The unit is 62” tall for those that have aspirations of
winning and will want to bring the appropriate vehicle to lug it home
in. The raffle tickets will be $1 a piece, with the drawing being
held at 4:45 p.m., so it’s a good idea to plan ahead as ticket holders
must be present to win.

Upon reporting on the event, I’ve come across a few pending items that
might perk the ears of arcade enthusiasts. One of the event
organizers has also indicated to me that a selection of classic arcade
titles, yet to be determined, will be positioned at the event, amongst
all of the classic free play items (which will include consoles from
the ‘80s and early ‘90s). I’ve also been told the event expects a
returning vendor from the previous year, which featured a score of
arcade marquees for sale. With a full month before the launch of the
event, it is possible that a few more arcade items could work their
way into the expo.

Outside of the arcade aspect, there are a few notable video game
culture guests at the event, including Robin Mihara, third place
runner-up in the 1990 Nintendo World Championships, who will be
officiating a 1990 NWC tournament, and Leeni, a Seattle native who is
a chiptune artist scheduled to perform at the event. If you’re in to
classic video gaming, it sounds like you’ll find something to love
here among the vendors and various events. Admission is $10 for
anyone older than 10, while those younger than 10 are admitted free
with the paid admission of an adult. If you’re taking the family, up
to five members can be admitted at the rate of $30. You can pick up
tickets early at the event’s official Web page,
www.retrogamingexpo.com, or in person at the Video Game Wizards game
store location – 9712 SE Foster Road in Portland. While tickets can
be purchased at the door, those who do purchase advance tickets will
enjoy early access to the show when they are granted entrance at 9
a.m. instead of 10.

LAI Games Begins Shipping Outnumbered To Arcades Around The World

I am glad that I investigated Arcade Otaku forums for reasons of...

Just got off the phone with FunWorld NH, they confirmed that they...