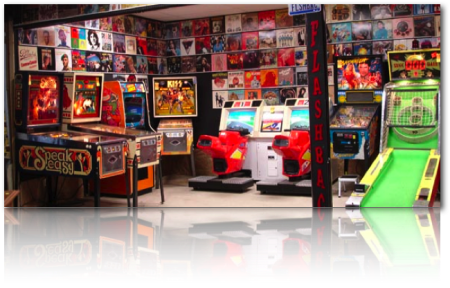 Arcade fans in Ohio, you have a new arcade place to look forward to checking out – if you can rent it out. Called Flashback Classic Coin Ops, the business is in the final development stages and should be opening sometime in the near future. As you can tell from the name, this will be a retro arcade although the owner will have some titles that you don’t see very often at other classic arcade businesses – electromechnical games. Not to worry, he will have a number of video titles on hand (listed in the news article are Frogger, Space Invaders, Asteroids, Centipede, Donkey Kong Jr., and Pac-Man) but among the EM games he will have include Speedway (there are a couple of EM Speedways, I am presuming that it is the one I am linking to) and Sea Raider. He also will have a number of pins to play including Captain Fantastic, KISS, Speak Easy and even a Hercules.

The way they will work is different than how most arcades function however, his place is open for party rental only. According to the news article linked below it’s : “Two hours for as many as 20 people, for a $200 total fee.” Considering how rare some of the machines he has are, I can imagine that is the reason why he doesn’t want the general public to take a shot at playing them. Despite that, it looks like a cool place and we wish Flashback the best of luck in their business.