New update for Pump In Up, PIU Fiesta

If you are a fan of the Pump It Up series of dancing games then you certainly have something to look forward to. In addition to the release of Pump It Up Pro 2 next month, Andamiro is 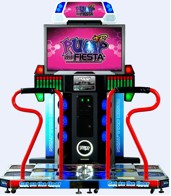 also releasing a new update for regular Pump It Up machines called Fiesta. The new update will feature 260 songs and also 2 new modes of play. The interface for the game has been improved to help bring in newer players and the game offers custom step building that can be uploaded with a USB drive. The update will be made available shortly after the AMOA/AAMA show next month and it will be at the show as well, where we’ll have to get some video or pictures of both new PIU games in action.

Also of a note, Andamiro has a new USA President after James Ko left, Satinder Bhutani who was formerly the sales VP there. Congrats on the promotion Satinder! (via Coinoptoday)

I am kind of disappointed that Big Buck Hunter isn’t on this...

Unfortunately yes, there was still a "no shoot" policy on Mission Impossible...