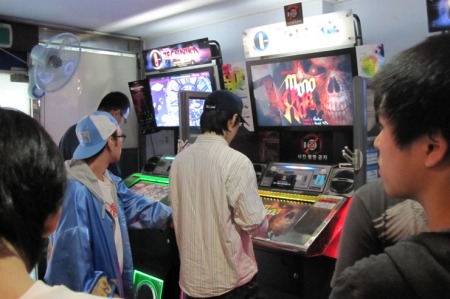 Pentavision’s DJ Max Technika 2 was recently seen on a location test in South Korea and a couple of sites (Bemanistyle.com and Ruliweb.com) have the rundown on what the sequel will bring to the table this time around. As you might recall, the first DJ Max Technika was voted as the Game of the Year 2009 here at Arcade Heroes, showing that the game has a pretty strong fanbase out there.

DJ Max Technika 2 uses a new touch screen for enhanced multi-touch capabilities, a co-op mode for two people to play on the same screen, new buttons, and a plethora of new songs. The co-op mode looks like it could be a lot of fun and it should increase the earning potential of the game as well(you may recall that one surprise at last year’s IAAPA was a DJ Max Technika clone called Magic DJ which included two screens). As far as I know, PM Studios plans on bringing this to the US, although I haven’t heard any “official” announcements on it yet. Still, they are teaming up with Bemanistyle.com to sell the DJ Max Technika 2 Signature Collection set, which includes the sound track from the game along with some other goodies, so that seems like an endorsement for bringing the arcade version to the States.  We have no idea how much a DJMAXT2 will sell for but let’s hope that they start it at a price below where 1 started out at as I think that the high price is a big reason why the game hasn’t been seen in many locations. This has me wondering, would an upgrade kit be feasible here? The cabinets look similar enough but with a new touch screen that would make for a high priced kit, although I can imagine that for some who picked up the 1st DJ MAX, an upgrade kit would be a nicer option than buying another full cab.