Of all the current arcade game manufacturers, no one is more at the forefront of creating kids video titles than Sega is. That’s not to say that others aren’t trying but we are seeing video 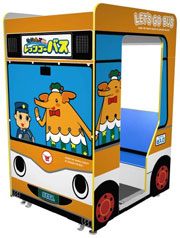 games which cater to kids come along from Sega more than others. They have a new Transformers game, several card based games, and a dual racer (Patrol Chaser) and dual light-gun game (Battle Police) which can link together. They have another game to add to that line-up now, with the release of Let’s Go Kids: Elephant Bus. This new game allows for one child and one adult to sit down and play a 2-4 minute game where they pick up both animals and people as they drive a bus route on different selectable courses. The game also features “road safety events” which pop up where it is used to teach a traffic rule. Combined with a vibrating seat (probably similar to what Sega used in the dual HUMMER Extreme motion cabinet but toned down) and it makes for a unique game, especially where it has been made with adults in mind to so they can sit down and play a game with their kid. Like all of the games mentioned above however, it’s doubtful that you will see this outside of Japan although the lack of a card system certainly makes it easier to move into other markets.