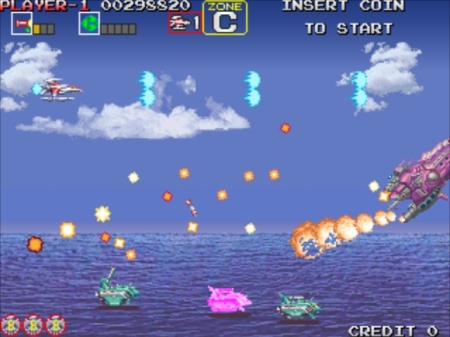 It’s been a little over a week now since we learned that Taito had placed a new countdown webpage on the arcade side of their Japanese site, a countdown which at the time of this writing is set to expire in 2 days and 16 hours from now. But why wait for the countdown when the cat has already been let out of the bag so to speak. Versus City is reporting that in an upcoming issue of Arcadia Magazine, they reveal that the new game is in fact a return to the Darius series, one of Taito’s popular horizontal shooters(popular enough that fans have made a Darius Wiki even). The last Darius in arcades was G Darius, which was released back in 1997. The only thing known about the game at this point is that the cabinet will feature dual screens but at least we can expect to find out more in just two days.

UPDATE: AM.Net and Versus City are both now confirming features for the new Darius. Apparently both of them have an advance copy of Arcadia Magazine where they are pulling the source from. Through the google translator AM. NET says the name is “Daraiasubasutoanazakuronikuru”, which Versus City helps us understand with “Darius Burst Another Chronicle”.  As for the new features, these include:

While this sounds great, I wonder how open Taito would be to giving the game an international release. That probably depends upon the price tag as it’s not like players are unfamiliar with Darius. I also think that the four player support could go a long way with this one – as an operator in a small space I pay extra close attention to such cabinets as I think that they are a way for me to get some extra bang for the buck.

UPDATE #2: Cabinet can be seen here

If you are unfamiliar with the first Darius Burst, it was a title on the PSP. Here is the trailer for that game below, the new arcade version will probably be similar to this but with those extra features mentioned (and shinier graphics).