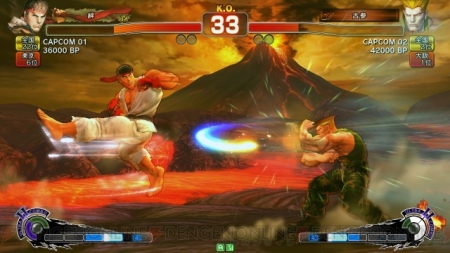 It wasn’t long ago that we heard that Super Street Fighter IV would be getting a December release. Now we have a price tag to chew on as AM-Net reveals the following about the kit:

In a currency converter, 1,912,000 in yen is around $23,000USD. That can’t be for a single kit – you might recall that the first SFIV Arcade was sold in packages of four complete cabinets for around $40,000 and the HDDROMKIT4 seems to indicate that these kits are being sold in fours as well. That would put the kits individually around $6000USD per unit and of course for an operator to get a 2 player setup going they have to purchase two since Capcom seems to think that the VS. configuration is perfect for everyone. I’m sure SSFIV will sell to those who already plunked down a several grand to get SFIV Arcade the first time around, assuming they still have the funds for such a purchase but I have a hard time believing that Capcom will really obtain sales on the scale of thousands that they are looking for at such a price. What would make far more sense is to A) offer a decent price for the game and make a build for 2p on 1 cabinet(ex. the new Blazblue is going for a little over $2k per kit) or B) offer the game on NESiCAxLIVE for a download, which eliminates the costs of hardware that SFIV operators have already invested in(it’s all running on the Type X2) and it could be sold at a reasonable price that many more could afford. Seeing how several other fighters are being made available on NESiCA including Blazblue Continuum Shift II, KOF98 Ultimate Match, Samurai Spirits Sen, Battle Fantasia, and KOF Maximum Impact Reg. A, it’s not like SSFIV should be out of the question. Then again I have heard that NESiCA will charge a small fee per game (like CoinUp does on Big Buck online games) which will increase the cost of each play which can be a hindrance on the users end depending upon the price per credit. Of course there is always C), which is available now – get a Game Gate VU and purchase a copy of SSFIV for the 360 or PS3 and you get a 2 player arcade setup for much less.