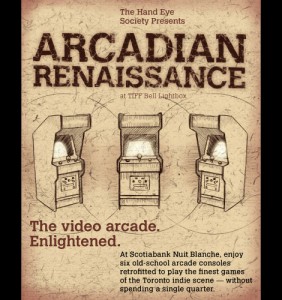 It seems that the idea of promoting your indie-produced game title (which is generally intended for a PC/XBLA/PSN/WiiWare release) inside of an arcade cabinet is starting to catch steam up to the point of becoming a fad.

There are two current events where independently produced titles are using arcade games to promote themselves. First is the Fantastic Arcade event that is a part of the Fantastic Film Festival in Austin, TX. There several games including Enviro-Bear 2000, Every Day the Same Dream, Monaco, Nidhogg and Norrland all used their own arcade cabinet as a way to draw attention to the game. Game blog Joystiq was there and snapped some shots of the various setups, although only one of them featured real arcade controls, with Enviro-Bear 2000 doing a trackball controller, real arcade buttons and took it a step further with a fur covered panel(thanks for the correction Rob).

The second event which takes place this coming Saturday on Oct. 2nd is The Arcadian Renaissance which is a part of the Scotiabank Nuit Blanche arts festival in Toronto, Canada. There six indie titles will be shown off in classic style arcade machines, which includes Night of the Cephalopods, lockOn 2, AlbaCross, Mondrian Provoked Monster Puncher and Heavy Weather. The aforementioned Nidhogg will also be there as a part of a tournament. You can read more about this festival at GameSetWatch.

I’ve already mentioned how this idea could be developed and taken further to a point to benefit arcade locations. If I only had the resources to make it a reality…

I'm a lifelong fan of video games and I have been operating my own arcade, The Game Grid Arcade in West Valley City, Utah since 2008.

Unfortunately yes, there was still a "no shoot" policy on Mission Impossible...