Arcades at the FER Interazar 2010 show in Spain

The annual  FER event in Spain may focus primarily on slot machines and other gambling devices but where many casinos have an arcade as a part of their facility, what better place to show off some coin-op games as a part of the event? Check them out below…

Let’s start out with some pinball, specifically New Canasta Pinball by Marsaplay. We’ve covered this game before but this is the first time we’ve seen it at a show. Apparently some people can’t accept it as “real pinball” for some reason or another. Here’s a video showing the game in action where you can determine whether it’s “real” or not.

Here’s another pinball item at the show, although one that decided to go the virtual route. It’s called Pinball Tronic and was at the Bifuca booth.

And while we’re on drivers, here’s a game called Extreme Speed. It’s unclear who made it though. Judging by the cabinet design it looks more like a simulator kind of racer than a robust arcade one.

Taito’s Panic Museum. I’m starting to loose track of all the different cabinet configurations they keep making for this one

Terminator Salvation. Also behind the Terminator was the popular BarberCut DX by Namco.

Rassen’s Vulcan-M is always good for making an impression. It looks like they’ve added some plastic shielding around the barrel to prevent someone from getting their fingers caught, which is a good idea.

Guitar Hero Arcade finds safety in a place far, far away from ASCAP 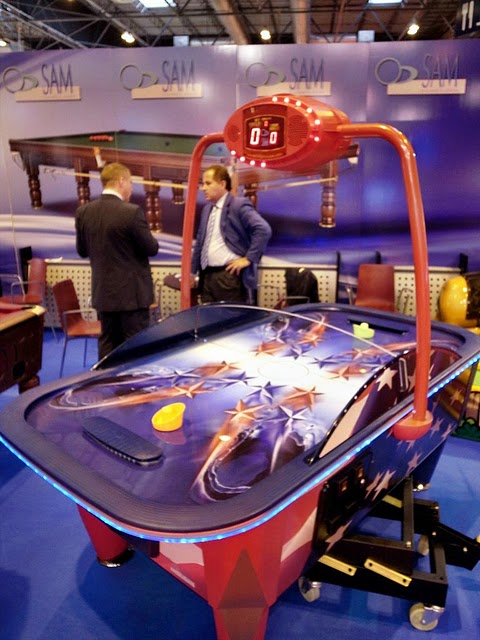 A foosball table for kids

There were many more products at the show but as I mentioned at the top of the post, they aren’t the sort of games you’d find on a route/arcade/FEC/etc unless you’re in a place like Vegas.