There is one thing we have been waiting to see from Sega about their Sega Card Gen MLB game – a video of it in action. Had I made it to AMOA09 I could have captured some footage 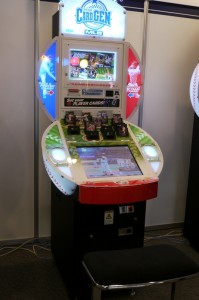 but I skipped that show in favor of IAAPA and Sega didn’t bring the game to the latter show. Now it appears that the game won’t be coming to the US  (which it is was orginally developed for) and instead has come out for the Japanese market in limited quantities. With that, Sega Japan has produced a short trailer giving us our first look of it in motion, although they don’t really show the cabinet, the card interface or the touch screen interface, which I’ve pictured here in case anyone had missed this previously. You can also visit the official Sega Card Gen MLB website which dives into those details, covering how the cards work and touches on some of the online features. The only thing we’re still not sure about is what hardware the game is running on and what the price tag will be for a machine.

Who knows if Sega will change their mind on bringing this back to the US as a limited release, perhaps it’s performance in the Japanese market will influence that on some level. Or maybe we’ll see it at IAAPA this year as a part of one of the several unidentified new titles that will be making an appearance there.

You can visit the official Sega Card Gen website here.