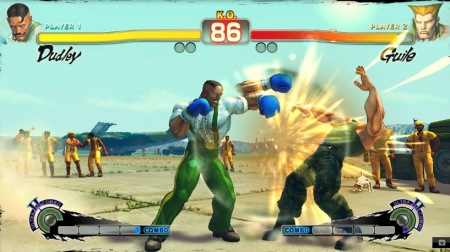 An editor for the Japanese game magazine Famitsu sat down with the producer of Street Fighter IV and it’s Super update, Yoshinori Ono. Thanks to a translation of the article by Andriasang.com, we now have a slightly better idea of what will set the arcade version apart from the home editions (beyond the obvious difference of the cabinet). First he states that it’s more than just a port – which is a good thing. He then details a little bit as to how they will balance the game out (which is fairly typical of SF updates, each new addition making improvements in “balancing” over the last so that no one character it too powerful or too weak), laughs about the possibility of new characters and costumes and a little more talk about whether the home players will get access to the exact same content. Read the article at Andriasang.com

To save myself another long paragraph of ranting, I will run a poll to see where people stand on the issue of players per cabinet (since it wasn’t brought up in the interview)