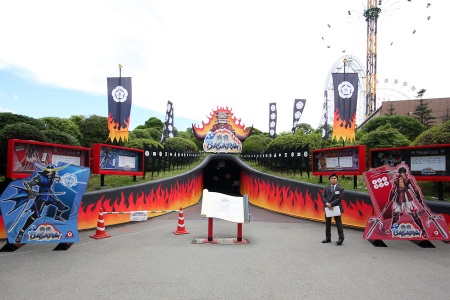 Back in 2005 Capcom released a new game for the Playstation 2 called Sengoku Basara. Five years and well over a million sales later they are preparing to release the 3rd installment 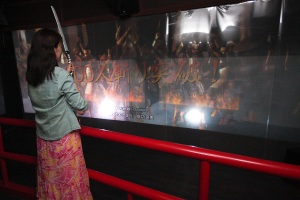 of the series and as part of the fifth anniversary of the game’s release, they already have an amusement park attraction to go along with it. Located at the Fuji-Q Highland park, the new attraction has you wandering through an ancient Japanese castle, collecting BASARA cards that you insert into certain devices placed throughout the complex as you play some sort of game and near the end, one gets a chance to play Sengoku Basara on a large projected screen with motion-controls. According to the translation @ Game Watch:

Will play the final round, which it will be cut with a sword and a giant video screen. First, kill the fireball as a practice stage.  The fireball on screen, “Zan” as someone called Mark, swing the sword away at it.  Nobunaga military confrontation with the practice followed by the stage.  I cut the first 100 and first stage. Continuously appear on Nobunaga army soldiers invaded from the front, “Slasher” will cut down the mark. There is also an element of Whack Even though, as I can not kill easily.  However, the number must defeat is not so much GANBAROU never give up.

While it’s slightly difficult to understand what all of that means, I imagine it’s something similar to the arcade title Mazan, but with a huge screen.

Full details can be found at Game Watch.