The GTI Asia China Expo has come and gone and finally we are getting a first look at the many new products that were on hand. Some look like originals, some appear to be bootlegs but on thing is clear, the Chinese amusement market is growing fast and as long as they can learn to lay off the bootlegs, then it will be a good thing. I’ve picked out some screenshots that were published on rs2006.co.jp where I’ll make my best guess as to what is going on.

One genre that was quite prominent at the show was that of the tank game. The only problem is in telling whether these are original games or just ripoffs of InJoy’s Panzer Elite Action in different cabinets. In the first picture below we have what I believe is the booth for Dore Game as I recognize the game on the left, it’s a game we’ve covered before called Railway Adventure. That’s one game I’d like to check out as it’s quite unique. The Dore Game website doesn’t show any tank game though so it’s hard to say anything more about the game on the right.

The KN&U Booth(click for their website). They specialize in jockey games but their website also shows that they have created new cabinets for a number of GlobalVR light-gun shooters (once again, it’s unclear as to whether they are authorized creations or not) and they seem to have their own line of unique dancing games. Tekken 6 was also at the booth.

Here’s another set of tank games at the Xiongye Electronics booth.  They aren’t listed on the Xiongye website and you’ll notice in the first shot that they modified a Sega Hummer cabinet for the standard version of the game. The game also looks a lot like InJoy’s Panzer Elite Action. The second pic shows some of the company’s dancing games.

I’m not sure which booth these games were found at but the game in the center might look familiar – it’s the Air Strike possible bootleg we covered a short time ago(I talked with a member of the development team for Air Strike and he said that this is a different software version than the one Tsunami shipped but the motion cabinet technology is most likely a ripoff). As for the other games, I can’t make out enough details to figure out what they are, which is something we often have to deal with from these shows. 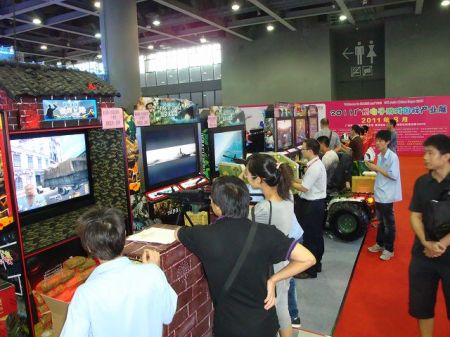 Finally the Lanhai Technology booth had several games but their website also doesn’t help identify anything.The first shot shows an obvious ripoff of Yoony Electronic’s Vulcan-M, the one on the left uses a chaingun, the right some other gun and possibly a different game as the marquee’s are different too. 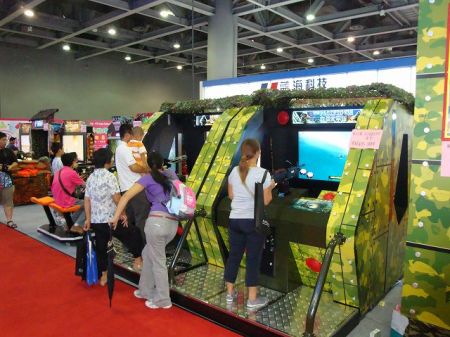 I’m loosing track of how many different cabinets GlobalVR’s Paradise Lost has been given in Asian markets. But more importantly in this shot is the game on the left- it’s a first person shooter that appears to use a control scheme similar to Taito’s arcade version of Half-Life 2. As for the game itself it could be a Call of Duty title although the HUD is unfamiliar to me.

More unidentified games at Lanhai’s booth. They sure are taking to making the cabinet pieces of art at least. 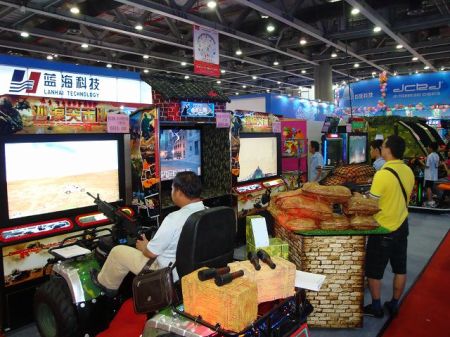 I almost didn’t catch this but if you look on the far left of this picture, you’ll notice that there is a Grip Strength 2.I wonder if the new Pentavision Global will be bringing this game to the US or not

That’s it for now, you can see some other pics at the rs2006 site and in the event that some video is unveiled from the event, I’ll give this post an update.