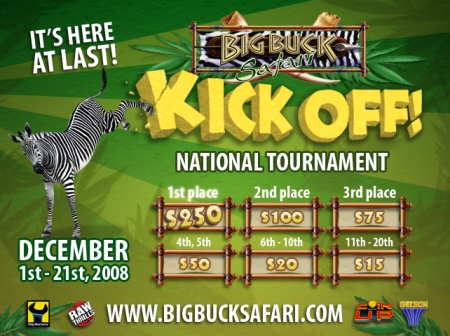 While the kit to put big Buck Safari online has been available for a little while now, it wasn’t until Dec. 1st that the tournaments began. But Dec. 1st has come (and past – sorry about the delay on this) and so right now online enabled versions of the game allow players to participate in the tournament that is offering a top prize of $250 with a total prize pool of $750. They are promising that as more machines come online, the bigger the prizes will be. The BBS online tournament ends on Dec. 21st.

Even though tournaments have begun on BBS, that isn’t ending the tourneys for Big Buck Hunter Pro. The Reindeer Games tournament is offering a larger prize pool and it fits into a Christmas theme. The BBHPro tournament ends on Dec. 27th. Thanks to the prize pools on both games, you have a good chance at winning a little extra cash for the holidays.

For more details, check out the press release after the jump or discuss on the forum.

In these uncertain economic times, one company is offering more ways to put money back in your pocket. Play Mechanix, the company behind Big Buck Hunter Pro Online and Safari Online knows that both the operators and players are looking for a way make more dough. That is why there is a National Tournament for Big Buck Safari as well as Big Buck Hunter Pro this month.

“The online Big Buck Hunter Pro units make 27% more than the isolated machines that are off of the grid and in addition to the Monthly National Tournaments that are run by Play Mechanix, the online machines allow for local tournaments, Trophy Club, Hunting Parties and other hidden gems” stated David Snipes, CoinUp Customer Service Manager. He continues, “There are more opportunities for players to win money and have fun with BBH Pro and BBS units that are online and the operators can make more money with all of these features as well”.

The December Tournament for Big Buck Hunter Pro is Reindeer Games where players will be taking aim at the top prize of $500 and a total prize pool of over $2300. Look for Jerad Berg to redeem himself in the December tournament after coming in at 9th place in the November tournament, which he helped create. Michael Jastrzembski took the top spot in Jerad’s Choice, but newcomer Kyle Sherwin cracked the top 5 to place 4th.  The top five Jerad’s Choice Tournament winners were:

The only way to participate in these tournaments is on a Big Buck Hunter Pro Online and Big Buck Safari Online game.

If you have any questions about the CoinUp network, contact Dave Snipes at dsnipes@playmechanix.com or by phone at 630-942-1070 ext-131. Add the Big Buck Hunter® Pro Online gadget to your iGoogle page by following this link http://www.google.com/ig/adde?moduleurl=http://hosting.gmodules.com/ig/gadgets/file/102704908103543895663/bbh-online-gadget.xml&source=imag