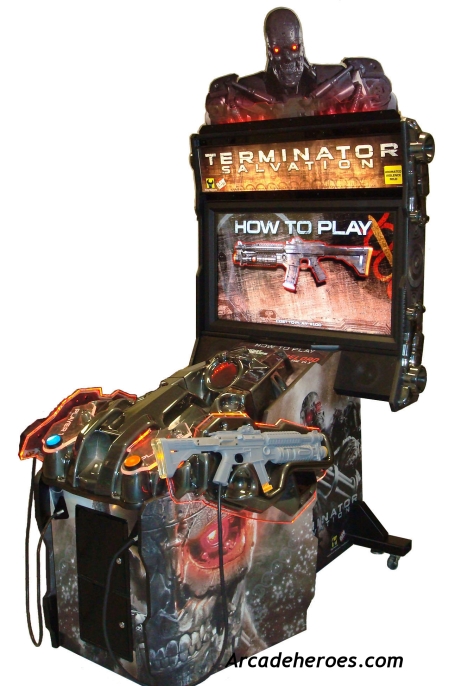 (Click on the image above for a more detailed view)

We first heard about a Terminator Salvation arcade title way back at ASI in March and except for a brief view of the game on a location test in June, there has been little else to say about the game since information surrounding it has been kept under wraps. But thanks to a new press release sent out by Betson today, we have our first proper look at the game, including what should be the final cabinet design. As you can see from the picture above, they have changed the cabinet up quite a bit since the location test (which at the time was using just a Big Buck Safari Deluxe cabinet with different artwork. The size of the guns is positioning this game to compete with titles like Rambo Deluxe or Ghost Squad Deluxe  and I assume we’ll be able to find out how much the game will cost next week. 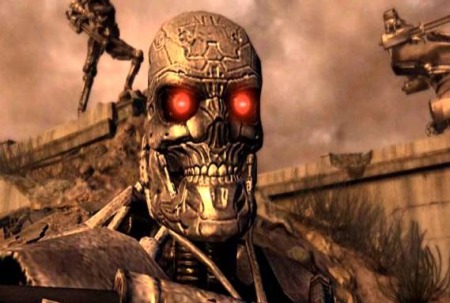 According to the press release (which is attached after the post break below) they also added a new reloading feature to the game that they are calling Clip action reload. While the press release doesn’t get into any details on how that works, it appears that you will reload by hitting the clip on the bottom of the gun. Where this will be at IAAPA next week I will be getting some more pictures, video and info on this new title, which will be appearing in arcades “soon”. As a side note, this is NOT the same game that graced the consoles earlier this year so no worries in the event that you were disappointed with that game.

UPDATE: Click here to watch a video I took of the game from the IAAPA show floor.

Terminator Salvation Soon to Appear in an Arcade Near You!

Inspired by the Halcyon Company/Warner Brothers worldwide release, Terminator Salvation Arcade captures all of the thrills and excitement of the 2009 mega-hit movie and then some. No expense was spared to design a cabinet that captures the essence that is Terminator Salvation. Adorned with glowing neon rifle holders and a life-sized replica T-600 model Terminator marquee topper with glowing red eyes, Play Mechanix has created the ultimate showcase piece. An impressive 42″ HD LCD displays in-game action cinematics of unprecedented realism. The players are thrust into the future and right on the firing line as Terminators of all kinds attempt to squash their resistance. Heavy-duty recoiling rifles, featuring a NEW “Clip” action reload feature, adds a depth of realism unparalleled in any arcade shooter. Players can add to their arsenal of weapons by securing numerous powerups including grenades, shotguns, rocket launchers and devastating miniguns. Full time 2 player play coupled with over 1 hour of cinematic gameplay spectacle maximizes high traffic, high replay and longevity in earnings. This game will surely delight arcade players and fans of all ages.

Headquartered in Carlstadt, New Jersey, Betson Enterprises with 11 distribution offices nationwide is the leading coin operated distributor of amusement and vending equipment, coin operated parts, and service in the United States. With over 75 years of experience and leadership in the coin-operated industry, we will help you make informed decisions that are best for your business.

Betson offers entertainment and vending solutions for your business through our relationships with the operator community. For locations looking for a simple and profitable solution or vendors looking for equipment that fits any situation, Betson Enterprises can help you. Betson Enterprises has an industry proven reputation for quality and customer focus. For more information on Betson Enterprises, visit www.betson.com or call 1-800-524-2343.