Yesterday, Stern caused a disturbance in the Force by announcing a new edition of the Star Wars pinball design that they released back in 2017. While there are no changes to the layout, and no new code to accompany this (yet), the hubbub came from the new art package that these are sporting, called “Comic Art Edition.” The artwork was done by professional artist Randy Martinez, best known for his Star Wars artwork.  The general consensus I’m seeing about this announcement is that fans are very pleased with the change, since the look of the machines is more vibrant and heroic than before. What do you think?

Stern also put this interview onto YouTube to give more insight

As I was curating the content for today’s post, I had something happen at my arcade that happens somewhat often. A mom was playing pinball (Ghostbusters) with her two young kids. They got a match, it played the knocker, then they started to walk away. Since I noticed it, I ran over and let them know that they won a free game, something I’ve done quite a few times.

That’s when I realized – why do pinball games still do this, when it would be easy to enhance that for today’s audience? Sure, pinball wizards know what a match is, the knocker acting as the bell to Pavlov’s dogs. But large numbers of casual players don’t have a clue. Why not enhance that with a voice over that says something like “YOU WON A FREE GAME!” in addition to the knocker, and make that a standard on all games? It wouldn’t hurt to have an “Extra Game” or “Free game” animation on the screen when that happens either. That’s what the knocker’s original intent was anyways – inform the player about a reward.

It’s not outside of today’s technological reach and I can’t imagine that it would require much work on the coder’s side to do. It’s a little thing, like changing the size of the Start buttons to make them more prominent, but if it helps keep new blood coming to the “sport,” then why not do it? You could also have fun with it, changing the voice to fit the game theme. Any objections?

Well, this won’t be happy news for Westerners, given that the Maximum Tune series is stuck on 5 over here (or even worse in Europe, 3 or 4). An upgraded version of WMMT6 will be launching to Japan soon, although the only thing we know about it from this tweet is that it will allow lower level players to race against against higher levels without the need for tuning. That might be a feature just for the testing phase, or maybe some new mode.

We will see if Namco has anything new for WMMT or video arcade games in about a month when IAAPA hits, but it’s hard to say if they will (I wouldn’t bet on it, at the moment). BN Japan hasn’t really made anything video related that would easily covert into a US game as of late, and the company has shifted their focus to VR. It does seem like the VR Zone locations have done really well in Japan, but the LBE VR market is a crowded field right now. IAAPA will have 80-100 companies all vying to have their VR maze/pod/ride/arcade product to become “the” standard. I would think that if you’re in the business of making arcade games, that it would be easier to get noticed in doing a traditional arcade game, but maybe that’s what I’m missing about the FEC market at the moment.

I’m a little surprised that this wasn’t done in the past, but better late than never! Congratulations on the achievement Brian, you certainly deserve it. I also should have a video of his most recent game, The Spectre Files: Deathstalker, but I’ve been having some issues with the audio sync (it’s synced fine in my editor, then I produce the video and it’s no longer synced). I’ll keep working at it and add it here if I’m able to get it uploaded tonight or tomorrow.

Creator of such videogame classics as RAMPAGE, XENOPHOBE and GENERAL CHAOS, Brian Colin is heading to Ottumwa, Iowa for his induction into the International Video Game Hall of Fame this weekend. #ivghof #prge #RAMPAGE #videogames pic.twitter.com/dBldfa3fSj

UPDATE: FINALLY figured it out, after several attempts. Not sure why it ended up being such a pain. There is still some audio drift later on due to a weird glitch in the recording, so apologies about that. This was the best I managed to do 😛

While I rarely watch anime (or much else these days…save for the very occasional binge), I did take time to check out High Score Girl on Netflix and was pleasantly surprised. I wasn’t alone either – I am certainly in the target market for it, but my older kids (ages 13 and 10) enjoyed it too, despite not understanding all of the 90’s or Japanese cultural references it throws out there.

If you “binged” it on Netflix already, and was curious to see where it would go after that cliffhanger, well the wait is almost over for those of us in the US. Season II of the show hit Japanese airwaves on Friday, with a mention that it would be hitting Netflix soon. I’m not sure when that will happen exactly, but hopefully before the year is out. 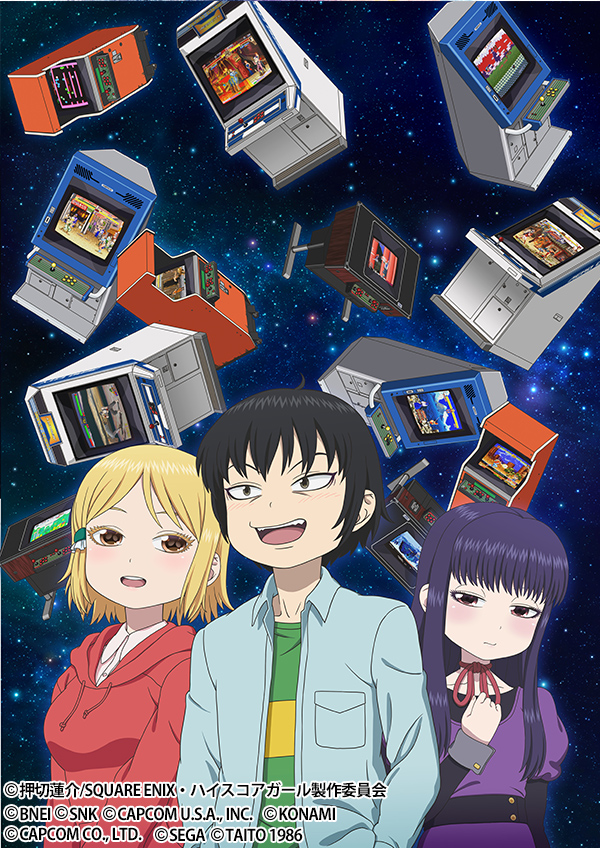 What Was The First Video Game?

That’s the question that this hour long video sets out to answer, providing plenty of history along the way. I was only able to watch the first several minutes of it as of this post, but it’s an interesting presentation and seems to be well-researched. H/T to Kevin Williams:

Admittedly, I have not dropped by a Chuck E. Cheeses in a while, but I’ve heard that many of the locations have been making big changes as they transition into something more akin to a traditional FEC. Has your local CEC done so yet, and what do you think about it?

Is Your Muscle Memory Up To Snuff?

That’s all for this edition of Newsbytes, have a great weekend!