Welcome Newsbytes, a semi-regular curation of arcade & pinball news content from around the world. Normally these are done just on weekends, although with the slowdown in amusement news as of late, I’ve had to hold some stories over so there is enough to talk about. Let’s get started with:

Earlier last week, I discovered that Sega had set up a website to promote their 60th anniversary by making dozens upon dozens of profile avatars. Each avatar features something from Sega’s history – a character, a product, a significant site, etc. I changed a couple of my avatars over using one of the arcade-themed pics; Hit up the link above to see if there is something that fits your fancy:

Some of the #arcade badges from the Sega 60th anniversary website pic.twitter.com/c6bQQbdMI8

Speaking of anniversaries, my arcade business turns 12 this week on the 8th. I figure I’ll do a week-long score competition over a few games to win an Arcade Hero patch.

One of the frequent points I’ve made about the Exa-Arcadia platform is that it allows arcade locations to have access to a much larger number of game releases than normal. “Normal” for our business has been maybe 20 video titles a year; That has also been changing for pure video, where many games happen to be videmption games first, which sometimes come with a non-ticket amusement mode that a location may or may not activate.

The latest update from Exa comes from the photo below showing a 12-game collection of new releases that are available for the platform. While the company is still waiting on EMS to re-open shipments outside of Japan, they are showing that once that happens, the amount of content you can grab or play on an Exa system will jump drastically, and in turn, what’s been released to arcades this year. As a note, you can contact them and switch to DHL shipping; while it’s an extra expense, it does mean that you’ll get your game sooner. Along those lines, I am receiving Lightning Knights on Monday, so expect a video about unboxing and playing that.

Note that some of the carts in this photo had been available before the shutdown (Aka & Blue, Kung Fu, Infinos Exa, Akyrios Exa…Chaos Code & Gimmick launched right at the tail end, so not sure how many got out there). That’s not all either…

Several other games have continued development for the platform while shutdowns have been in place around the world, meaning that they are not far behind the others. One of those is a scrolling shoot ’em up by the name of Vritra Hexa. The game has been mentioned on the blog here many times, and the developer has been busy stress testing the game to make sure that the code runs smoothly after many hours of use. It’s looking solid, so I also imagine that this one is very close to reaching production.

Exa isn’t the only ‘indie’ org that is still working on content. Last week I spoke with Chris Cotty, head of coin-op sales for SMX, who told me that they have plenty of coin-op SMX units ready to ship (obviously with all of the shutdowns, sales have slowed for everyone). Operators who have already grabbed the game have been reporting strong earnings, Chris also mentioning that a location in Canada has seen it consistently outearn a DDR and PIU at the same venue. Chris also operates 8 On The Break in New Jersey, but it is looking like NJ will be keeping businesses like arcades closed through the summer. If you want to help Chris and Step Revolution out, a number of distributors are carrying the game and all of them should have financing options available.

Also, the game has added a cool cover between the stand and monitor portion. While a small thing, I think that it looks nicer this way than to have the tubes exposed: 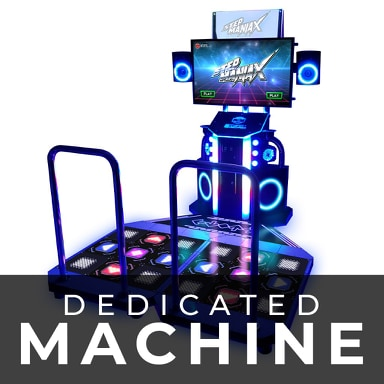 I thought I had mentioned this in a previous Newsbytes, but I must have missed it. It fits with indie developments, as the coders are showing off some conceptual ideas for a new horizontal scrolling shooter made for MVS/AES systems. While the footage below is not running on MVS hardware, they designed everything to fit within the restrictions of the hardware. Should be interesting to see how this one pans out; You can find more footage on the Chipsonsteroids channel.

Thanks to Oga-Shi for alerting me to this awesome backpack in Japan, designed to not only look like an arcade cabinet, but it is playable too! A few more details are available on Lineblog (Japanese).

Dead Flip Does A Deep Dive Into TMNT Pinball

If you are itching to see how the recently announced TMNT pinball machine plays, then Dead Flip has you more than covered with this nearly 2 1/2 hour

Stern has received most of the pinball attention this week, but competitor Jersey Jack wasn’t staying quiet as they released this teaser video for their next project. While there is no mention of the theme, they are touting that it will be innovative. What do you think it is? Rumor still holds that it’s Guns N’ Roses pinball for their next theme…maybe something with projection mapping or true volumetric displays? Perhaps some kind of AI interaction with the band interacting with the player? Hopefully we won’t have to wait too long to find out.

While I haven’t done a ton of searching for feedback on this, so far everything that I have seen about it has been overwhelmingly negative. While toppers are nothing new in pinball, making a basic, lame topper that unlocks a special game mode, then charging $600 for it certainly makes one scratch their head. If it had some cool effects like fake flames and a moving dino head, then it would feel more justifiable. Or, if this was being used to fund a major code update that would include lines from major characters in the original film, which is completely lacking (Nedry/Newman is ok and all, but where is Jeff Goldblum or Sam O’Neil??) I don’t begrudge any company for turning a profit, as that keeps things open and going, but I fail to see what warrants such a crazy price tag for…this:

If you’ve ever wondered what sets one port of Cave’s DoDonPachi apart from another, then this video is for you.

Pac-Man Waka’s His Way Onto Minecraft

For something sorta related to arcades, one of the most popular games in the world can now enjoy some first-person dot eating action with the Pac-Man update. It allows you to play Pac-Man mazes, while building your own, thus making it a kind of Pac-Man Maker (ala Super Mario Maker). I mentioned this to my Minecraft obsessed kids and so far no bite from them, but maybe if they watch the video…

Axed Arcade Game Clockwork Aquario To Be Resurrected For Consoles

Here’s a good example as to why developers wouldn’t want to throw out their work, even when a game is canceled. Digital hoarding has it’s benefits!

Strictly Limited Games has announced that they have been working on resurrecting the unreleased Sega/Westone Bit 1992~1994 arcade game called Clockwork Aquario. Per that link to Unseen64 about it, people who had played it compared it to Wonder Boy 3 and Super Mario Bros. – which tells you why it failed. It was being developed for the Sega System 18 board, which had been released in 1989 and powered the likes of Shadow Dancer and Moonwalker. By 1994, not only was the hardware outdated, 2D platformer games were also being thrown to the wayside for 3D titles. Thanks to 2D indie revivals, the game will get a second chance at life on the PS4 & Switch sometime this year. When they say that they are looking at other platforms though, they can get this into arcades with an Exa release <hint, hint, nudge, nudge>

Where my arcade has been open since May 1st, I now have a month+a week of operation to see how things are. Overall, May was fairly terrible, but it was better than April – to compare, May was down 71% from last year, while April was down 100% (as I was closed the full month). On an encouraging note, this week of June has been very good, much better than any week of May. While I write this post from my arcade, today has had people here since I opened at 10am. Here are some other related stories of re-openings:

IAAPA 2020 Is Still Set for November