It’s been a bit since we’ve discussed some location test games, i.e., arcade games that are beta testing by going out on location at an arcade. Arcade news has also been kind of slow lately, but when it picks up, it’s suddenly a deluge like this. So let’s get up to speed with what has popped up out there as of late.

As an important reminder – games on test often change between what can be shown here and the final released product. Sometimes those changes are radical, or the game ends up getting canceled altogether. I did reach out to both Sega and ICE about these games but received no response, so I will detail these as best I can given the pics.

The last time we had a major story about House of the Dead Scarlet Dawn was the discussion of a standard (we call them SD) cabinet of the game that Andamiro & Sega created for the South Korean region. I tried to find out if what has been seen out there is an example of an import on one of these, but without an answer, I’m not sure. That said, I believe that Sega is testing the waters for a more widespread SD version out there, due to where it’s been seen.

To backtrack really quick, when Scarlet Dawn was released in 2018, Sega only offered one model, the Super Deluxe (SDX), which you have likely seen and played out there. Also as an important data point to the story, Sega Amusements International is primarily operated out of the UK.

So far, all of the examples I’ve been able to locate of this new model are showing up in the UK. This is why I believe it’s a test and not an import; Sega tends to test their games out there first when they can, and imports from Korea aren’t exactly a big thing right now. An SD version removed the back of the cabinet, the bench and pares down the sound system. This also did not appear to include the lighting and wind effect features, but that could also differ with testing.

For those seen out in the West, here is the earliest example I could find, which was posted onto social media back in 2019. It’s a UK location and it indicates that Sega has been looking at this for a while now. The cabinet is also different from what Andamiro later showed off, particularly with the floor panel. That likely functions like L.A. Machineguns’ platform, distilling the game feedback/vibration into the floor instead of the seat. Thanks to Jdevy for the tip on this one.

The most recent sighting came from this tweet where the poster was happy to find a Scarlet Dawn cab, which just so happens to be the same model as the one above. Now it is possible that the game above moved locations, or that Sega is spreading out their testing; I won’t know until there’s some official word. But this was posted just a couple of weeks ago. From another response to the tweet thread, it’s at “The Light Sittingbourne,” which is a movie theater+Arcade and more. 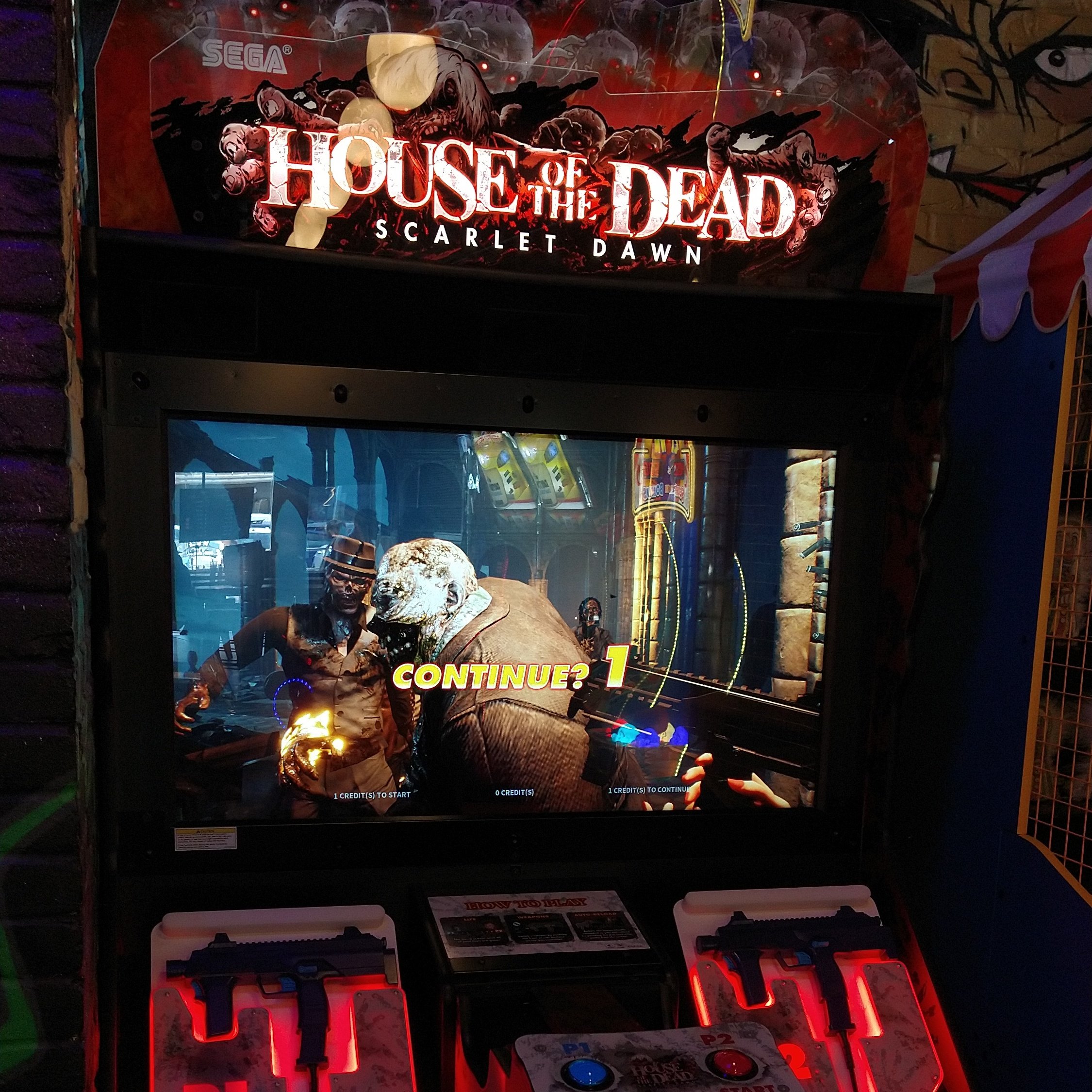 There was one other photo that Jdevy had pointed me to of the game in the background, but it was too small/blurry to really use. We’ll keep an eye on it for more news and I imagine we’ll know something by IAAPA.

Speaking of IAAPA, this one has not been seen on location test yet, but it will be shown soon when IAAPA Expo Europe begins in a little over a month in Barcelona, Spain. This was revealed through a promo image that they put onto social media, where when you look carefully at ATV Slam, you’ll notice that the cabinet differs from the version released back in 2019:

It looks like they are removing the motion base for this one, but otherwise keeping it the same. It’s hard to tell (and it’s just a CG render), but it also might remove the air blast feature, but we’ll have to wait and see.

To go on a tangent for a second, I’m really happy to see more SD tests going on. Even before the pandemic, it was starting to become a bit of a pain for small arcade operators, as almost no SD alternatives were being made available. It used to be that you’d always get a few of these options when the game launched, to fit the needs of different locations, but the FEC explosion of the late 10’s meant that manufacturers just wanted to chase that money. While many games are a little better in DX or SDX forms, you can’t fit (or afford) all of them into your space when you aren’t running a 30, 60, or 100k sq. ft. facility.

Thanks to Jdevy for this one as well. Spotted on test in Buffalo, NY. My old contact at ICE no longer works there so he was unaware of this. Apparently based off of the old pre-video era game Fascination, which is sort of based on bingo (and BattleShip) and it involves ball tossing. The text on the game mentions that you can clear a bridged ball (I believe that’s what it says, it’s a little hard to read) by hitting it with another ball. From the test setup, you get 8 throws in 45 seconds, but get the 4-in-a-row with only 4 throws to win the big bonus. There’s a cannon above the marquee on each player; I can’t tell if that’s just decorative or if it serves some purpose to the game (overhead light, maybe?)

Once again thanks to Jdevy for this one, which is a game that has had an interesting journey since we first heard about it via UNIS back in 2018. It’s possible that the game was released in China and has ended up switching hands, or maybe Wahlap was the original developer and UNIS had tried to test it over here for a time. Regardless the history, the newer Wahlap “Active Season Version,” which was recently shown off at a tradeshow in China, is now testing at a D&B in San Diego, in-between a dance machine (DDR or PIU?) and the Vader Immortal VR game:

That’s all we’ve had for now – see an unusual game you’ve never heard of before out there? Let us know!

Spooky Pinball To Launch Scooby-Doo! Where Are You?